This topic comes from a natural magic: fireflies tend to flash in unison.

A simple model for this spectacle can be a pulse-coupled oscillator. The same mathematical structure also cropped up in models of other interacting systems like

All science today have a intricate character:  complex, self-organizing system, millions of interactions occur simultaneously- when everyone changes the state of everyone else.

Unfortunately, our human minds are bad at grasping these kind of problems. There is a lack of centralized control nor chains of command. That straightforward logic that we like to accept is too feeble and myotic.

Also. these complications ratchet up the mathematical difficulties tremendously. It’s one thing to wish for a more realistic model and another to construct one that’s tractable. No insight is gained if the model is as perplexing as the phenomena it’s supposed to describable. This is what makes mathematical modeling an art as well as a science: An elegant model strikes just the right compromise between simplicity and verisimilitude。

There might be millions of specialized oscillators, all charging about N times a second. And like other biological population, these oscillators were bound to be diverse (like a norm distribution). These oscillators would spontaneously synchronize by pulling on another’s frequencies. The pulling force was influenced by the amount and extremist. To start with a bell curve, by pulling on one another’s frequencies, many of them collapsed into the absolute center, forming a powerful mainstream, their combined power was strong enough to recruit few moderates from either wing. However, the two tail extremists won’t change and will also attract some moderates. 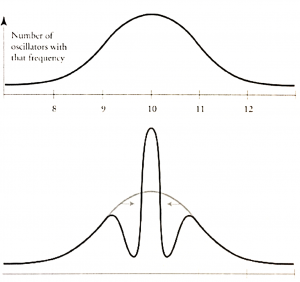 There are two things that all biological oscillators share: the ability to send and receive signals. In another word, two functions: “influence function” and “sensitivity function” are all the things we need to characterize an oscillator in a model.  To make sense of this idea, we can imagine an oscillator as being like a jogger running around a circular track. The different locations on the track represent different phases in the oscillators’ cycle of biological activity. Imagine if joggers could shout to other joggers ( in the basic scenario,  you could imagine there are only two of them.). Influence function would be how loud and the things they shout( quicker/slow down). The sensitivity function captures how they react to an incoming message, like when sensitivity happens to be high and positive, then the listener will follow whatever directions coming at him.

To make the model more general, we could suppose different oscillators have different influence and sensitivity function. Also, one oscillator could be influenced by many other on the phase track.

Japanese physicist Kuramoto raised up a symmetric model which ignores the exact location for different runners (in running club content), there is only a relative gap between runners. For each runner receive the signal and the leading slow down, tailing speed up with the same amount. A distinguished finding of Kuramoto’s model is (Which Wiener had missed)

Interestingly, rather than trying to find some intuition from computer simulation, he insisted on going to solve a bunch of non-linear equations directly. He was guided by intuition alone which is risky.

The surrender experiment: my journey into life’s perfection.

21 lessons for the 21st century